Why Do I Write Stories?


Why do I write stories you ask? Spend one precious hour after another, sculpting my protagonist, refining my diction and sharpening my plot? I'll answer that, but first, let me tell you a story.

A story solving a query you never knew you had.

Well it depends on the song really. A good ol' 90's Rock song comes on and I'm transported immediately to another realm, as if pushed into a time warping machine that altered my reality. I stand mighty high on the edge of a wide podium, one foot firmly on the ground and the other resting grudgingly on a speaker, facing a mob of a million. These are my people, flocked under the open summer sky, baking under a merciless sun, soaked in each others sweat as shoulders brush, suffocating in a thronging mosh pit. Valiantly they endure to profess their allegiance to me. Their deafening roars rise up and suspend mid air like a sound cloud. But it's not about them. The bright, white spot light illuminates my figure emphasizing who is important, highlighting every curve and fibre of my being. I straddle my shiny cherry red guitar and coo into a mike that resonates my tone across the land. Shirtless, I sway my body that is chiseled like a god. I belt a chorus and the crowd responds with heavy head thrashing and loud screams, I croon a verse and they cry in hushed sobs. Mesmerized by their idol they are hypnotized into my control. They reach out in hopes of caressing just a loose thread somewhere on my being. But I am not on a plain as the ordinary. In my own little imaginary bubble, I am the rockstar I hoped I would be.

Well it depends on the song really. Put on some soul cleansing Jazz and I teleport to another dimension, like a mutated gene suddenly gave me that ability. I am a heart surgeon, the most capable one at that. In my green gown I stand in a brightly lit operating theater surrounded by two fellow surgeons and three nurses, adorned in the same attire, admiring their mentor through protective goggles. The light blue walls do little to soothe our nerves as we  peep into an open chest cavity, the ribs held aside by a retractor soaked red. We stare down at a weak maroon heart with gray meshed veins, whose beat is slowly fading. I have a decision to make, should I salvage the damaged aortic valve or replace it with a modeled synthetic? A little child's life rests on a knife's edge, and only I have the ability to save him. With swift resilience and a firm resolve I bellow, there's no time to fabricate a spare, we'll just have to fix it! With that command, the operation theater and everyone in it conspire to aid me in whatever I demand and follow me into any life threatening cave. I dive in with my scalpel at the ready. Many hours later I emerge, victorious of course, to gift a family their only child back. In my own little imaginary bubble, I am the genius I hoped I would be.

Well it depends on the song really. Play some Mozart and I whirl into space and emerge in another universe, as if a warp hole presented me the opportunity to travel through the multiverse. I am a master painter, one that Michelangelo would envy. There's no curve so twisted I cannot replicate, no colour so complex I cannot produce, no canvas so ugly I cannot beautify. On a mountain I sit, perched atop a chair, whose feet have sunk into the snow. The valley below is hidden by a thick fog that engulfs the Earth like a blanket, allowing only the tall, brave mountains to pierce through and reach the sky. The sun hangs dimly in the sky illuminating hundred such gray and white mountain tops, creating a vision any mortal would kill to witness. But my interest lies elsewhere. A white canvas rests on an easel, and it's the only thing that dares come between me and my muse. Ah my muse, the untameable one, the only object I ever want to sketch and the only one I failed to master. She sits on a jagged rock staring at nothing in particular, her expression calm and her composure relaxed. Adorned in a red gown, the perfect contrast to the white snow, her beauty thaws the mountain daring it to consume her. As my brush caresses the canvas, gently giving it colour and life, one stroke at a time, I wonder if this maiden whose love I yearn for will ever paint my colourless soul. In my own little imaginary bubble, I am the artist I hoped I would be.

Well it depends on the song really. I hear a 12 bar Blues progression and with the blink of an eye I apparate, and reappear on a beach as if I were a magician. The sun drifts lower into the sea, bowing a final goodbye, basking the Earth in a warm orange glow. The hot golden sand escapes between my toes as my feet sink into the velvet cushion, and the cool sea mist hugs me like an old lover. I watch my little daughter, a piece of my soul, the reason for my existence, run towards the waves as her pink sundress flutters in the breeze. Not too close honey, I gently warn. I'm a simple man who has led a simple life, a man who has achieved nothing phenomenal but a man with no regrets nonetheless. On my little girls face I see a smile wider than the horizon, her eyes glisten brighter than the setting sun, and my heart sighs in content. I run to her and lift her high and she sits on my shoulders, not caring to hold on to my face. She knows she won't ever fall of her very own throne. Into the sea we venture, one careful step at a time, her laughter echoing through the universe with every splash. I am a simple man who has led a simple life, but when she giggles in awe and screams daddy, she makes it all exceptionally remarkable. In my own little imaginary bubble, I am the father I hoped I would be.

And now I come back to reality, back to you, to answer this question you asked. Why is it that I write stories?

Why, it's quite simple really. I write so you can see as clearly as I do, what happens when I listen to a song. 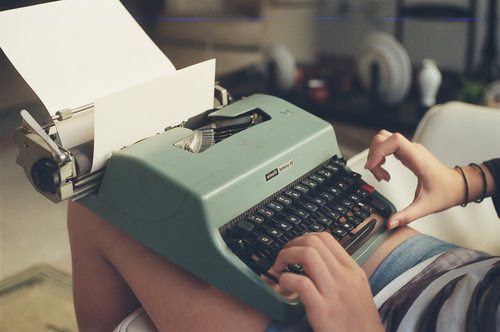