Why I Killed Myself

I had dreams you know, gargantuan ones that reached the moon and scratched its surface. My eyes had a bright twinkle, the shine that comes from looking far into the future, and I had a silly smile plastered to my face, the grin that comes when your thoughts have no boundaries.

I stood on top of a hill, both hands on my hips and my hair fluttering in the wind as I gazed ahead. I saw a thick blanket of green leaves that stretched far away until it sank into the ocean, and houses with red roofs, people running on foot kicking up clouds of dust into the air chasing something invisible. And I could see it all because I was on top of the hill, high above everything and everyone. With my hands on my hips and my chest inflated, I told myself I was the master of it all, answerable to no one with only the sky above me, and that too, too far way to reach me.

And then a little squirrel brushed against my shin and ran down the hill, and I the master of the universe was obliged to capture it, and so chased it with fury. It ran with the conviction of a prey being chased and I followed it with the determination only a hunter can have. It swerved to the left in an attempt to elude me and I cut just in time and kept on its tail.

After some time, the exact amount I know not for time has that sly demeanour of slipping by unnoticed, I caught on and grabbed the squirrel by its tail. I hung it in front of my face and I snickered at the poor bastard who thought he could outrun me, the king of the hill with the gargantuan dreams that pierced the moon.

Then I turned around only to notice I had reached the bottom. Standing at the foot of the hill I once was the king of, I looked up and saw a pale, transparent silhouette of the little boy with the dreams that reached the moon. I slowly looked down at the skeleton of a dead squirrel long perished, held by a thick hairy hand of a man with a large portly belly, and I felt a cool breeze caress my balding head. So engrossed I was in the chase of the squirrel that I didn't see the hill whiz by. For a second I stood bewildered and wondered what happened, and then I realized:

Time has that sly demeanour of slipping by unnoticed.

And so I went home and sat on my gray couch, with a whiskey in one hand and a cigarette in another. Once again I thought, like I did every evening and every night before I slept and every morning after I woke up, of the dreams that blew out my mind and soared up to the moon digging deep craters that were visible from the Earth.

A knock on my door wiped across my thoughts, and I smiled knowing who it was. As he sat on the lonely gray couch I reflected on his life instead. He had huge dreams as a kid too, not bigger than mine but big nonetheless. But he hadn't been tricked by the squirrel, he followed the rabbit instead, down a densely vegetated path with thorns that scratched him and hurricanes that pushed him to the ground, snakes that lashed out at him and quick sand that swallowed his boots, but he braved on and conquered every dream he had as a kid.

And yet here was on the same gray couch with the same white cigarette wallowing in misery. It struck me right then, it didn't matter whether you followed the squirrel or the rabbit, this gray couch is where we were destined to sit on, equally miserable.

That night as I lay awake, listening to the low hum of a rusted ceiling fan, I had a different thought. I didn't think of the gargantuan dreams that scratched the moon, instead I thought about how we weren't worthy or capable of happiness, and I wished I was a tiger. A simple tiger that could run around free and hunt and sleep and sip cold water from the river while brushing against a deer and hunt and nap again.

So the next day I went to the zoo to admire the tiger, but what I saw was a tamed, chained cat that barely had a purr in its throat. No majesty there. But the tiger in my thought last night was an untamed jungle beast, not this captured feline.

And so the next day I went for a safari, deep into the jungle until I saw a free, savage wild tiger. It looked helplessly at a herd of bison, almost pleading with its eyes to give one up for dinner. Then he tried to chase them, from left to the right from the leader to the newborn, all in vain. And then he left, dejected and hungry.

As I lay in bed that night, I had a new thought. If the tiger cannot find peaceful existence, then what can? Then it dawned on me, there is no peace in living, not for the accomplished man, the hopeless man or the tiger.

Holding on to a homemade noose, I thought my final thought, of the day I was on top of the hill, with the world beneath my feet, and only the sky above me but that too, too far away to reach me. I was the king of the universe once.

And then I chased a squirrel. 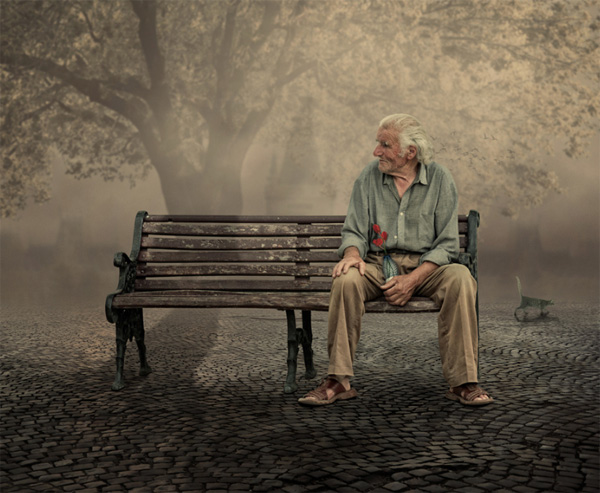