The Biology Of Music

- March 05, 2017
Brilliant! she exclaims as I strum my guitar producing a melody I practiced rigorously only to extract that very response. I smile as she proceeds to compliment me in enchanted awe, you have a real gift, did you compose that piece yourself?

I smile, wink, and move on to the next phase of my seduction: pretend this talent is congenital, as if my hands move with unmediated ease. It's so enchanting you'd think there's an orchestra serenading you, and yet it looks so simple, she admires.

Wait, what? Did she just summarize years of unrelenting practice, hours of assiduous study, endless sessions of failure and self motivation as.... 'SIMPLE'?!!

I think of giving her a tour of the insides of my guitar by running her head through the wood but that would mean hurting Isabella, my dear guitar. She does not comprehend what goes behind a composition. It's not a recipe as facile as take a chord and smother it on to a rhythm! Music has a story to tell, one with a prelude, a plot twist and a finale. It has a dance to perform, one with tugs and spins and dips and bows! If you dissect a tune you'll see how ingredients of complex emotion provoking notes come together in a seamless, flowing melody!

You see I first pluck a C major arpeggio, one delicate string at a time to stimulate your senses, kindle interest and jolt you into my performance. Gently I progress to a soft rhythm with an F major to evoke euphoria that warms your chest, arouse pleasure that streaks your cheeks red, pique curiosity and bring you to the edge of your seat, and just when I see in your eyes the glimmer of hope, the daydream that nothing can go wrong in a world made of lilies and marshmallows I strike an A minor with thunderous fury bringing everything crashing to the ground, piercing your soul to let the sadness gush out and refreshing the torment that wet your pillow for nights on end. You drown in the pain and bask in the sorrow letting misery engulf you and just when you're about to give up I strum the G major that reaches out into the depths of your torment like a caped superhero and pulls you back into the heavens, flooding back the radiance and the ecstasy to restore your hope in a happily ever after.

Does she realize that the composition is only step one? The guitar is a mere vessel, some fine wood stuck together and polished to a magnificent shine with six steel stings of measured thickness wound in calculated tension. With every strum all Isabella does is disturb the air around her into sound waves of varying pitch and volume. That's just the beginning.

The waves rush like a gentle tsunami and flood the Pinna, the ear. The ear, designed with motherly affection and placed at perfect distance from the chin with exact symmetry from the nose, is a visual masterpiece that adds charm to your miserable face! Mind you, the ear is not only about aesthetics, for every curve has a purpose and every ridge an intent. You see the outer ear is curved and bent and perfectly folded to accept sound waves and pass them on, unadulterated, to let you locate exactly where the sound is coming from and at what distance it originated.

The a cappella of chords travel across the ear canal like a train through a tunnel and enter the middle ear to strike the tympanic membrane, the eardrum, with unforgiving force. The membrane endures this relentless attack and vibrates along, joining in the merriment, becoming one with the disturbance. My medley is then dutifully relayed to the Ossicles, three of the smallest bones in the human anatomy placed in perfect mechanical unison, working with such flawless ingenuity that no engineer could ever design. Working synchronously, the Malleus fondly called the Hammer, the Incus lovingly called the Anvil, and the Stapes affectionately called the Stirrup respond to the ear drum's vibrations and swivel like pistons with fluidic flexibility. But moving around is not all these bad boys do, no sir. The ratio of the ear drums surface area to that of the Stapes is designed with calculated precision to give the initial vibration a boost, amplifying the entire signal by over 17 decibel as a contingency to the loss it is going to incur on reaching the Cochlea's fluid medium.

The three musiketeers transfer the amplified waves to the human bodies very own sound engineer for one final sound check. The most beautiful auditory equipment known to man, the Cochlea, a coiled tube that wraps around the auditory nerve like a Python around its prey, but more gentler, with a design more intrinsic than the ceiling of the Sistine chapel. My concoction of musical notes flow into the Basilar Membrane in the Cochlea which is filled with fibres and sensory cells that sit patiently in neat rows, like keys of a piano waiting to be struck. These fibres and cells, very much like piano keys, are tonotopic in nature, meaning they are monogamous in their relationship, each married and reacting to only one particular frequency and no other. As the vibrations pass over these rows of fibres, waves of a particular frequency excite the fibre it is married to and this fibre in turn excites the corresponding sensory cell whose tiny hair structures shear, catalyzing a chemical reaction which generates electrical impulses that the auditory nerve picks up and sends to the auditory cortex in the brain telling the brain HEY! I picked up a  frequency of 261.63 Hz so give this silly girl the perception  of a C chord.

I lament this melancholy in my mind of course, I still have the intention to impress. I realize as I come back to reality, that as my mind wandered around the surgery of music my hands were still strumming and the melody still continued without a single note being missed.

I guess it's not all that hard after all.

Read next: You Think You Know Love? 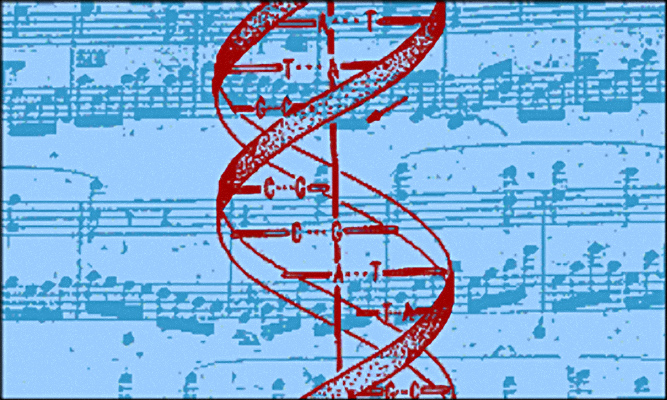