The Chaos Theory (The Butterfly Effect) and Karma

Chaos Theory is the branch of mathematics that deals with complex systems whose behaviour is highly sensitive to slight changes in conditions, so that small alterations can give rise to strikingly great consequences.

Do not panic. The definition is quite simple, it just says small changes in the initial conditions of a system can cause a gargantuan change in the result.

The most popular example for the chaos theory, one we have all definitely heard of is the Butterfly Effect. There are many variations of it, a simple one goes as follows:

The details of a hurricane, like its speed, location or path, can be influenced by a single flap of a tiny distant butterfly, days earlier.

Karma is a concept founded in Hinduism which explains causality through a system where beneficial effects are derived from past beneficial actions and harmful effects from past harmful actions, creating a system of actions and reactions throughout a soul's (Atma's) reincarnated lives forming a cycle of rebirth.

In simple words, your fate or future is determined by the actions of your past and present. It goes on to say a man is made on this Earth as the deeds of his past. One of the first mentions of Karma is in the Hindu scripture the Rigveda.

How fascinating, two theories, one founded with scientific backing and the other by spiritual interpretation have almost the same basis and concept. This just goes to show how science and spirituality(not religion, there's a difference) is very much on parallel spectrums.

How do either affect you? It's quite simple really. Remember, everything you are right now, your job, your status in society, your financial condition every relationship you have, every disaster to befall you and every triumphant victory, is not the will of God or a design of the supreme being, but a manifestation of YOUR OWN ACTIONS.

Take some responsibility, right now! Stop blaming the supreme being or the universe for your present state. You are here only because of your actions.

OK I've blamed you for your present, now let's talk about your future. Your future is quite controllable you know, it's a blank canvas and you hold the paintbrush. Take a moment and reflect on what you want for yourself, and then take actions, small at first, to take your life in that direction.

Karma, or the Chaos Theory is only telling you this: The end result is not a consequence of chance. It's an outcome of your actions and the beauty is, your actions are managed by YOU! So what are you waiting for? Go ahead, begin designing your destiny!

You are the architect of your own fate. 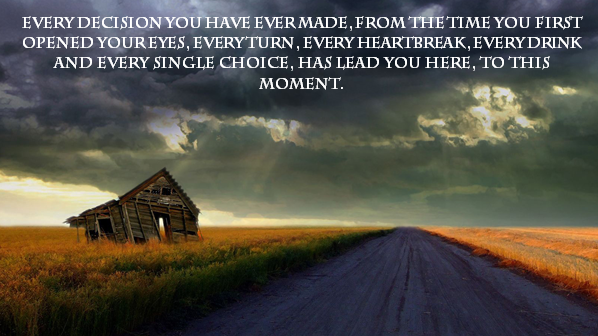