Schrödinger's Cat and the Leap of Faith

Science and Philosophy are those bickering twins that are preaching the same gospel but in different languages. Every scientist has used philosophy to explain science and every philosopher has used science to credit philosophy. Scientists have always been fascinated by how the mind can control matter while philosophers have always connected quantum energy with consciousness. 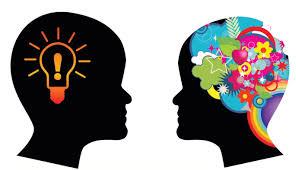 We're living in an advanced era, with science reaching unprecedented heights and philosophy exploring life altering methods. It only makes sense for us, the not so involved, to get involved. These posts are an attempt to understand scientific theories and their underlying philosophical implications.

Physicists have always used thought experiments to conjure and conclude theories. In earlier days it was a matter of necessity, since electron microscopes and Hadron Colliders weren't around. But even with the availability of modern tools, thought experiments are how new revelations are being unfolded.

The concept is quite simple. You see something strange and you cannot quite explain why it occurred. Instead of jumping into experiments, you first formulate a theoretical explanation as to why it happened and then proceed to prove your theory, ergo unraveling why the strange phenomenon occurred. This is a form of thought experiment. 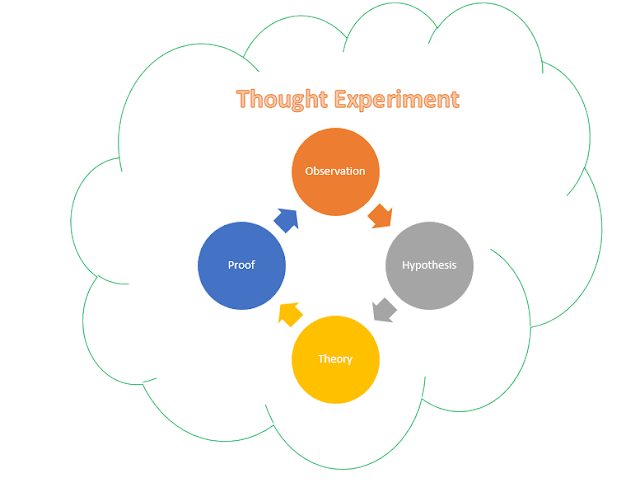 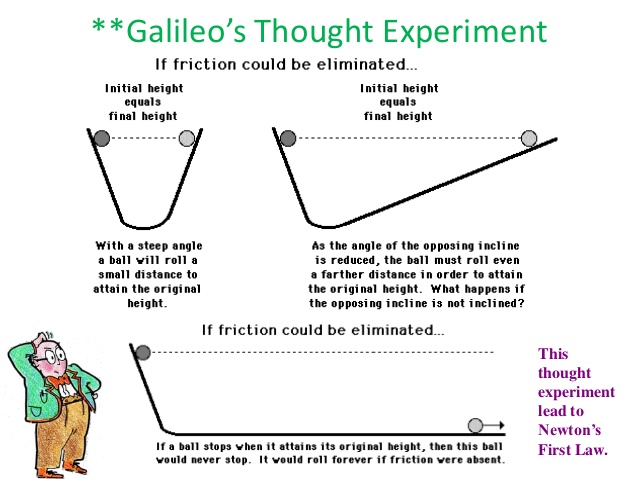 A thought experiment is what lead Einstein, Podolski and Rosen to came up with their famous EPR discussion. All of this began with scientists arguing over the nature of light. Is it a wave, or a particle? 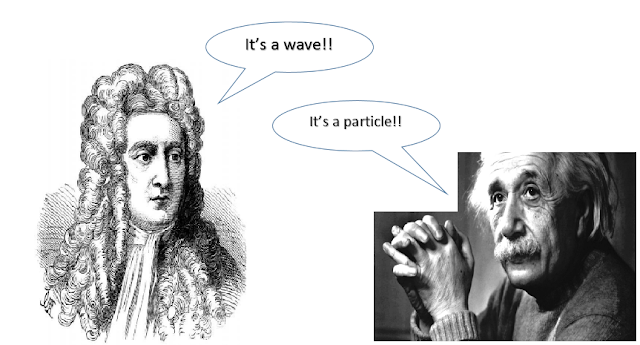 Light exhibits numerous properties. Reflection and refraction were clear properties of waves, and since light exhibited them, light was considered to be a waveform. But then came the discovery of the photoelectric effect. This particular phenomenon was unsolvable using the waveform equations. This lead physicists to hypothesize the particle behaviour of light, that light existed not as a wave but as a small, singular particle. They said light exists as packets of energy, or quanta. Thus, the Photon was born.

This lead to a peculiar scenario. Some occurrences, like bending of light, the Doppler Effect, etc were only explainable by the wave nature of light and not the particle nature, while other phenomenon like the photoelectric effect, images formed in pixels etc were explainable only by the particle nature of light. The experiments went on with multiple papers being released and Nobel prizes being won until the discussion lead to the final conclusion: light exhibits both properties. This was coined the dual nature of light. 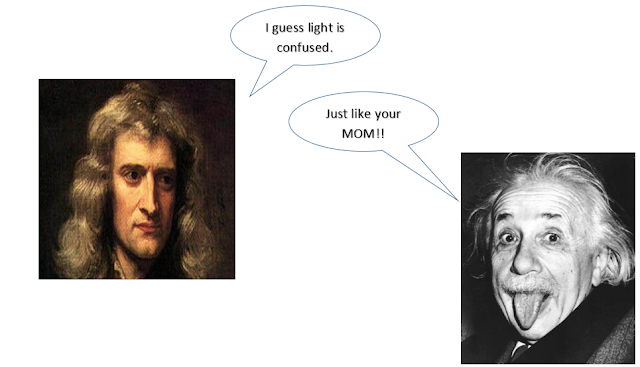 But on what basis does light choose to present either form? Surprisingly, the answer is not one that seems very sciency. The deciding factor, ladies and gentlemen, is YOU!

This is explained by the Copenhagen Interpretation, and the final step leading to the Schrodinger's cat experiment. 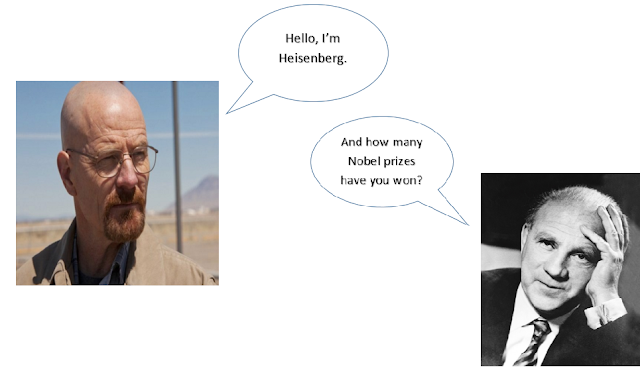 In it's simplest sense, the Copenhagen Interpretation, devised in the years 1925-1927 by Niels Bohr and Werner Heisenberg(no not the breaking bad guy), is defined as the following:

Physical systems do not have definite properties. They exhibit every possible property(known as superposition), until measured, upon which they collapse into a singular state. This applied to our light scenario would mean light exists as both, a wave and a particle, simultaneously. Depending on what sort of experiment or measurement we are performing, light then collapses to assume one of the two forms. 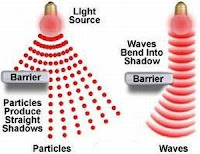 The milk in your fridge is both, good for consumption, and spoiled. Only when you take a sip will it assume on of the two forms.

Mind boggling isn't it. A tad bit silly to comprehend as well.

Now, coming to the Schrodinger's Cat experiment. Probably the most famous and ideal example of the Copenhagen Interpretation. Austrian physicist Erwin Schrodinger wrote a letter to Einstein with his experiment as an example for the theories outlined in the EPR article. The experiment goes as follows:

A cat is penned up in a steel chamber, along with the following device (which must be secured against direct interference by the cat): in a Geiger counter(instrument that measures radioactivity), there is a tiny bit of radioactive substance, so small, that perhaps in the course of the hour one of the atoms decays, but also, with equal probability, perhaps none. If it happens, the counter tube discharges and through a relay releases a hammer that shatters a small flask of hydrocyanic acid. If one has left this entire system to itself for an hour, one would say that the cat still lives if meanwhile no atom has decayed. The first atomic decay would have poisoned it. The psi-function of the entire system would express this by having in it the living and dead cat (pardon the expression) mixed or smeared out in equal parts. 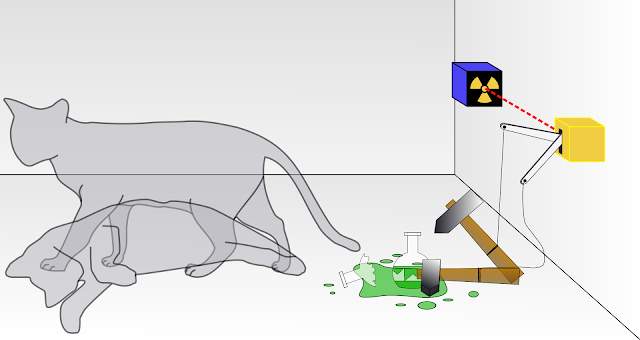 Since we do not know if there is any decay at all, we can only say, through the Copenhagen Interpretation, that the cat is BOTH alive and dead. Until the cage is opened. Only when the cage is opened, does the cat assume one of the two forms.

Until you open the box, you will never know what lies inside.

Do you now see the philosophical impact of this scientific breakthrough? Until you open the box you never know. Until you try, you won't succeed. Until you sow, you will not reap. If I had a rupee for every time I heard that line at church, I'd have at least ten rupees(only because I don't go to church that often). 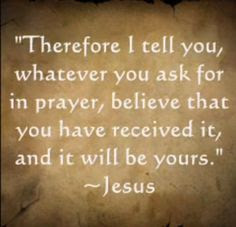 It's really important to take that leap of faith. That dream job you wanted, the car you wanted to buy, the girl you wanted to propose to, none of it is going to simply fall on to your lap. You're going to have to get off your ass and get it. At least try to. It's very true what they say, the grief of losing is much less painful than the regret of not trying.

The next time you're facing a difficult situation remember this: The Universe is on your side. She has used all her powers to make every outcome a possibility. All she needs from you is for you to reach out and grab it. If you don't get what you want, that's alright, because the next set of possibilities are already laid out. You're just going to have to look for it and reach out again. You got fired, big deal. Dust it off. The Universe has already exploded a multitude of options for you. But she's not going to give them to you, no sir. You have to take a stride in her direction and reach out for it. Your girlfriend dumped you, you failed an exam, you lost your keys, you're at a dead end job, you're unhappy with life, your children are ungrateful, your car won't start, your plants won't blossom, IT DOES NOT MATTER.

Dream of the alternate possibility, of a positive reality. It's already present in the universe. It will only manifest into a reality when YOU truly believe you deserve it and reach out for it. Imagine it, Envision it, Live it. 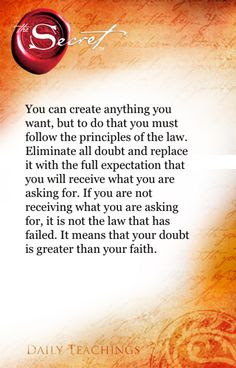