The Curious Case Of The Dead Bridesmaids - Part 2 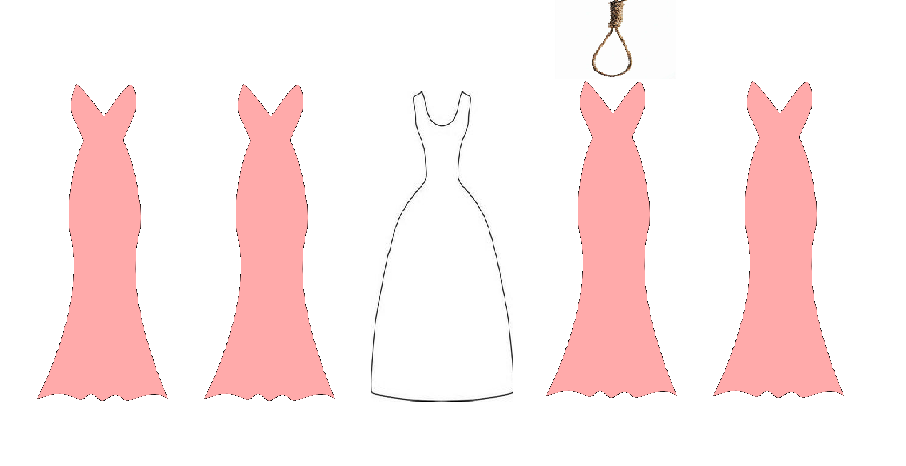 Noel scratched the back of his hand with a finger nail jagged from biting. It was days like these that made avoiding the substance difficult. He had flashes of the girl in bed, lying limp but seeming peaceful. With eyes closed he reached out into nothing, but in his mind he was caressing her cheek with his finger. Slowly, gently and then he felt it, a slight slip at an oily patch. He knew that was a clue, probably the only clue. If only he could use, he'd be able to think clearly.

You know you need it when the jitters get so violent you cannot hold still a cup of coffee. Your joints ache and you twist and squirm to stretch them in an attempt to feel relief. Your head jerks from right to left cracking joints. Your vision becomes cloudy, your mind, blurry and your judgement severely impaired. You know you cannot escape. You will shoot eventually.

There's something about getting high in the open, the sweet fear of vulnerability that elevates the feeling. So you walk around until you find a secluded street, a deserted cemetery or a dilapidated building, and you walk in until you find a sequestered corner. You sit down on the floor leaning against a pillar, on sharp rocky cement and get comfortable. You empty the contents of your pockets to the floor and the only artifacts to fall out are what you're here for, your door to nirvana.

With trembling hands you open the small folded paper and empty the remnants of a white powder onto a spoon. You stare at it absorbing the truth that there's no turning back. You light the melted, disfigured red candle and place it on the floor. You hover the bowl of the spoon over the flame until the powder melts and eventually forms a boiling liquid. The syringe is ready. The needle attached is new, no chances there. You pierce the surface of the hot liquid, its viscous exterior giving in to the sharp needle, and pull the plunger allowing vacuum to pull in the holy liquid. You take the brown rubber tube from the floor and tie it around your left forearm, tightening it until pressure exposes green veins on your skinny brown hand. You dodge the dark spots, scars from previous jabs, and pick a landing spot. The needle pierces the skin, then the vein and you press on the plunger, allowing the heroin to surge in, mix with your blood and flow unabated through your circulatory system.

A second passes. Then another. And then the drug hits, as sudden as it is euphoric. You let go of everything, both on your physical self and your mental theater. You let the blanket engulf you and you sink into its velvety embrace. And then you dream.

Three separate weddings. Three bridesmaids unknown to each other. No common names between guest lists. And yet the three knew the murderer. Where are you hiding mystery guest. The oily cheek. What are you trying to tell me.

Noel opened his eyes. In front of him was a frozen scene from the wedding. He walked around his hallucination. He was on the stage, the elevation giving selected people a sense of importance from the rest. The bride in her overpriced white gown that contrasted nicely with the maroon background, blushing. The groom in his flashy suit, grinning. Haley smiling with what looked like jealousy. He got down from the stage and mixed with the crowd. Everyone faking happiness. Why are you all smiling. And then he saw him, almost as sudden as the heroin's kick. Standing there, oblivious to the crowd who was paying attention to the bride and groom. His look was blank but his mind was calculating, formulating. The hallucination evaporated, slowly, letting reality hug him. A half constructed building floor stared back. He turned to face the pillar he was leaning against and stood, using the pillar for support. One wobbly step after another, he made his way down and exited.

He passed stony buildings as the noon traffic zoomed by. The sun was up and not at all merciful. But it didn't affect him, not in his state of delirium. He found the store he was looking for between a cafe and a butcher's stall. He entered. He looked around and pointed to a silver cylindrical tube placed on the top shelf. Once in his hands, he opened it and took a sniff.

He was unsure if it was the drug or his sense of smell but he was certain this was it. And that also meant he knew who the killer was. He threw the box on the counter and ran out.


He kept running, bumping into pedestrians, some of whom ignored him, most of whom gave him the finger. A quick turn and a zebra crossing later he entered the art gallery. This was where he usually held meetings with the chief. There was something poetic about the paintings, how fascinating it was that an image on someone's mind could be portrayed for others to see. It was like mind reading.

For today's revelation he chose a local painter, Kane's, A screaming woman. He didn't really understand art, the woman seemed calm to him rather than screaming. The vivid mix of red and green soothed him. Maybe it was just the heroin. Chief Inspector Liam was on his way.

He felt a coat brush against his right arm. He turned to face Liam, seated next to him in a dark brown overcoat and a black hat. His white stubble clearly saying he was stressed.

"Who's the one person who is at all weddings but not a guest?" Noel asked, all the while staring at the dark face of the woman in the painting.

"The parents?", Liam ventured a guess. He knew he had to play this game before Noel blurted what was actually on his mind.

"That's an answer, but not the right one. Think outside the box chief"

"I don't know Noel. We checked the guest lists, we checked wedding photos, we see no one in common." Liam sighed taking of his hat and ruffling black and pepper gray hair. His patience was running out.

"How about the guy taking the photos?" Noel felt the heroin taking him deeper into a trance, but he managed a smile at his revelation.

Liam got up and made a call. Ten minutes later he was back.

"Jesus. The only common name at the three weddings is the photographer." with that he walked away and made another call.

This time it took him thirty minutes to return.

"Noel. If I didn't know you hate human touch I'd have hugged you. My team went to the photographer's place to get him in for questioning. He bolted at the sight of them. He tried to, before Rebecca's shin landed on this hip. He confessed immediately. How did you figure?"

"The oil, Chief. The oil on her cheek. The photographer used a special lubricant to smoothen his zoom wheel. A bit of it must have stuck to his finger when he used the lens. A little of it rubbed of on the girl's cheek. Earlier today I went to a store and checked out a lubricant and what do you know, we had our killer."

"Well you saved our asses on this one Noel, thanks" Liam said standing up and patting Noel on the back before leaving.

Noel continued to stare at the painting. A dark woman in a red dress sitting on freshly mowed grass surrounded by tall trees. It seemed serene. He still had a few hours of lucid dreaming left.

Why would Kane say she's screaming?